The North Carolina Speculative Fiction Foundation is proud to announce the winner of the 2016 Manly Wade Wellman Award for North Carolina Science Fiction and Fantasy,  after the result of voter selection from the nominees, in turn the result of voter selection from an eligibility list of over 100 novels. The award was presented on July 16, 2016, to Charlotte author John G. Hartness for Raising Hell. 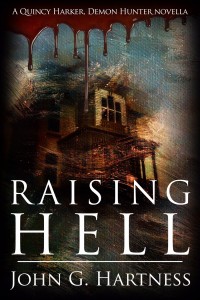